2020 was a helluva year. A National Pandemic, Murder hornets, people opening ancient coffins.. it seemed that anything that could go wrong, did.

But it was also a time that I saw people taking care of each other, quarantining, joking to keep each other sane and finding things they loved with all of the time they suddenly had.

For me, I worked from home some, watched a lot of movies, and read a lot more books!

It’s a bit surprising that the last post I’ve made since this one was my 2019 year in books, but I just haven’t been able to type anything out. I’ve made it my goal though to start reviewing more books and video games and posting them to my site here. I know June is a little late for New Years Resolutions, so we will say it’s my half birthday resolution.

“One flame to light the night. Aelin raised her shield, and flames encircled it, too. Burning bright, burning undaunted. A vision of old, reborn once more. The cry went down the castle battlements, through the city, along the walls. The queen had come home at last. The queen had come to hold the gate.”

So this book series follows Celaena Sardothien. Celaena is, at the beginning of the book the best assassin in the country – but she got caught. She is highly trained and no one knows who she really is when they see her face.

She is offered a deal – become the Prince’s champion in a life or death tournament and work for the King after, or stay in the salt mines where she is serving her sentence. If she works for the King for 3 years – she will be granted true freedom from him and her crimes.

This book series is heart wrenching, strong, interesting and I loved every moment of it. As the books advance we are introduced to more characters points of view – and the whole story ties together at the very end. Just when you think there is no hope, there definitely is.

I love all of the characters that are introduced throughout the series. There is a special place in my heart for Fenrys (people who have read the books will know why). Each one brings something different to the series and when you finally see how it all goes down in the end, it’s amazing. Makes me wonder how Mrs. Maas starts her writing process. Does she know what each character will become when she introduces them? Does she just add them and let them take the reigns?

I don’t know. But I do know if you are a fan of fantasy, humor, love, some steamy scenes and war – this is the book for you.

2. Court of Thorns and Roses by Sarah J Maas

“I didn’t know how long my sisters and I lay there together, just like we had once shared that carved bed in that dilapidated cottage. Then—back then, we had kicked and twisted and fought for any bit of space, any breathing room. But that morning, as the sun rose over the world, we held tight. And did not let go.“

A Court of Thorns and Roses is another of those War/Love/Humor/Strength/Steamy books that I absolutely adore!

Oh and look at that, it’s by the same author as #1 on my list

This book’s main character (I say that, but throughout the series we are introduced to a lot of characters and a lot of their viewpoints) is Feyre Archeron.

Feyre is the youngest of 3 sisters, all who live with their father in a shack in the human world. Feyre is the only one who makes an effort to feed the family by hunting.

At first, I was not a fan of the sisters. I get that they had this fall from riches and are now the paupers, but some effort would be nice.

Feyre is out hunting for the family and comes across a wolf. She kills it, and within the next couple of nights she pays the price – because the wolf was a Fae.

Another Fae comes to the house and demands a life sentence of Feyre for her slaying of his Fae follower. To protect her family she goes with him, and lives in the Fae world beyond the border.

But of course, she starts to realize that the Fae aren’t so terrible, and aren’t the same as the creatures she’s been taught to hate her whole life.

The entire series from start to finish is SO GOOD, and so many things happen that you just don’t see coming. From Feyre’s strength, but caring nature to future friendships, this is definitely a series I recommend reading if you are into Fantasy-Romance.

“The trick of life,” she said, “is that you can’t hold the pain for too long. The magic, either.”

I wasn’t sure what to expect when I started this book, honestly.

I loved Cassie. Her view on life, her little snide comments to herself. Such a great character. Each of the characters seemed real, alive and had their own personalities.

Main story wise – boys are vanishing, Cassie is terrified of her dad because of what she suspects he’s doing to her sister (indeed, Dad seems creepy and some of the things Cassie notices makes me just .. “ich”)

There were some twists and turns to get to the ending, and right when I thought I had it figured it out with Cassie – we were both wrong.

“This is all you really need, isn’t it? Just one good friend. Somebody you can be stupid with. Somebody who’ll peel you up off the ground, prop you against the wall.“

This book follows a group of Native American friends throughout their life. When they slowly start dying one by one, the remaining friends start to make a connection on what is happening.

When they were younger there was an incident (and I’m not going to explain here because it took awhile to get to that point in the book. So if you want to know, read it!)

What we learn is that because of this incident, something wants revenge. And it will stop at nothing to get it.

This book is well written, and it honestly feels like you are reading a true story. It’s creepy and spooky in the right parts, and keeps you on the edge of your seat. You become so attached to some of the characters, even if they don’t have that much story time.

I definitely recommend giving this book a read if you are in the mood for something spooky!

5. In the Tall Grass by Stephen King and Joe Hill

“Becky thought she had walked twenty steps into the grass. Maybe thirty at most. The road should’ve been close enough to hit with a Frisbee. It was, instead, as if she had walked the length of a football field and then some.“

I can’t remember what came first… the movie or the book? But of course, the book is much better than the movie was.

It starts in the car with two siblings who are also best friends on a journey. The sister is pregnant.

They make near a grass field where they hear someone calling. Without thinking, they run into the grass – and well.. more stuff happens. The book itself is pretty short in all honesty, but a lot of creepy stuff happens in the grass, and most who go in, don’t come out. It’s definitely a book that made me *uncomfy*

6. Shadow and Bone by Leigh Bardugo

“I’ve been waiting for you a long time, Alina,” he said. “You and I are going to change the world.”

8. The Cabin at the End of the World by Paul Tremblay

“Not all gifts are easy to accept. The most important gifts are often the ones we wish with all our hearts to refuse.”

I’ll tell you what.. I know reading Paul Tremblay that I needed to be prepared to be disturbed.. but this one really got me.

The story follows a small family vacationing in a cabin in New Hampshire. Wen, and her parents Eric and Andrew. We learn a little bit about the family and see the love early on in the book.

When Wen is outside catching grasshoppers, a man approaches the cabin and Wen makes friends with him quite quickly.

This is about the time you start to get uneasy – and I’m not going to give away more than that.

If you can, while reading this book, don’t read ahead. Read each page as it comes and let the uneasiness settle over you. It’s worth it.

“If you define yourself by how others see you, then suddenly you’re nothing to even yourself.”

Laura Clery is amazing. Her life stories, her early acting stints as well as getting into trouble. I think she is an amazing person with a great story, and I’m so glad to see that she is where she is.

There is some darkness in this book and the reader can see the effects of drug use and what it can do to your life, but there’s also hope. We get to hear her story of becoming clean and sober for her family and it’s awe inspiring.

This is a non-fiction book that I love, and I definitely recommend it.

“She had changed me more than I’d known it was possible for me to change and still remain myself.”

Judge me all you want – I’ve been waiting for this book for 12 years.

It’s everything I ever wanted out of a book from Edward’s point of view. Now, I won’t lie to you. I read the first draft in 2008. I was.. curious (that’s the word I’m going to go with here). And then I read a fan fiction that wasn’t good. It started with Stephanie’s work and then kept going – and none of the character behavior made sense to me.

And now, having successfully transported myself back to my high school self and devoured this book, I’m glad I did.

Some of the insight into the Vampire lives makes it so intriguing. In particular, the way Emmett becomes protective and turns into a “body guard” for Bella after the James incident… I was so happy that I cried. Just a little bit though.

This also gives great insight into Edward’s behavior in the first book, and you can see the change and… well honestly it’s nice to see HOW IN LOVE he already is with Bella. Even if he is super dramatic about it.

I love Edward’s point of view though I have to say I think I prefer Bella’s. That doesn’t mean I don’t wish Stephanie would be like “oh hey I’m releasing all of the books Edward POV” … but Bella is the MAIN character, and the stories were written for her. It doesn’t make sense to you, but it does in my head.

Also I read the blog where Stephanie mentioned she wouldn’t be writing anymore of Edward’s point of view because he was an anxious character and gave her anxiety.. and I get it. But sad face.

So this is Fenrir :)
Curls (ish) and grey hairs.. embracing the natural I guess.
See y’all in 8 days! 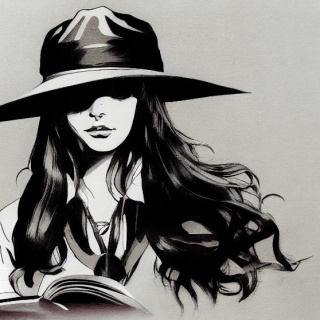