Ignatius Perrish spent the night drunk and doing terrible things. He woke up the next morning with a thunderous hangover, a raging headache . . . and a pair of horns growing from his temples.

At first Ig thought the horns were a hallucination, the product of a mind damaged by rage and grief. He had spent the last year in a lonely, private purgatory, following the death of his beloved, Merrin Williams, who was raped and murdered under inexplicable circumstances. A mental breakdown would have been the most natural thing in the world. But there was nothing natural about the horns, which were all too real.

Once the righteous Ig had enjoyed the life of the blessed: born into privilege, the second son of a renowned musician and younger brother of a rising late-night TV star, he had security, wealth, and a place in his community. Ig had it all, and more—he had Merrin and a love founded on shared daydreams, mutual daring, and unlikely midsummer magic.

But Merrin’s death damned all that. The only suspect in the crime, Ig was never charged or tried. And he was never cleared. In the court of public opinion in Gideon, New Hampshire, Ig is and always will be guilty because his rich and connected parents pulled strings to make the investigation go away. Nothing Ig can do, nothing he can say, matters. Everyone, it seems, including God, has abandoned him. Everyone, that is, but the devil inside. 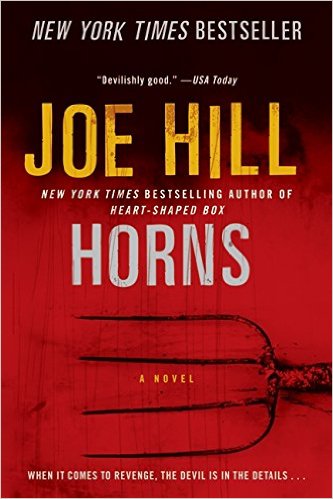 Instead of a normal review, I’m going to set this up like I am answering discussion questions. That’s because I am. I wrote some questions (and borrowed some from Reddit) and answered them for my book club.

Before we go, fun fact I learned (I can’t find the source but I think it was Wikipedia)

“The inner front and back cover of the book has a repeating message written in Morse code. It reads, “Pleased to meet you; hope you guess my name,” which are lyrics from the Rolling Stones song, “Sympathy for the Devil.” It refers to the novel’s themes that the devil is more of an anti-hero than a villain.” Like Deadpool?

Q – In a story where the devil in us all is made very obvious, are there any characters who might be seen as more of an angel? Merrin might be an obvious choice, but who else?

A – I think that Terry could be angelic. When it’s his turn to confess to Ig, he tells him about Merrin’s death and starts the whole process of justice. He seems to be the only character that actually worries about Ig, and comes looking for him / offers to help. He also is the one who shows Ig exactly what happened the night Merrin got killed… I also think the book hints at this a little bit.  “She [Merrin] pointed at the statue of the angel with it’s horn. ‘Looks like your brother.’ ‘No it doesn’t,’ Ig said… although, in fact, considering it again, it did rather resemble Terry playing his horn, with his broad, clear brow and princely features.”

Q – Does the Gospel According to Mick and Keith feel like a hopeful one? Tragic?

A – I think the Gospel according to Mick and Keith feels like a hopeful one. Ig gets to talk to Dale (Merrin’s father) and finds out information that will help lead him to why Merrin really wanted to break up. He also gets to give Glenna a chance to lead a more fulfilling life, and to no longer let men take advantage of her. It also explains what happens, and in the end Terry is convinced (thanks to the horns) that Lee, Eric and Ig are all dead. He decides to go to New York and learns Glenna is going there too. I think the two of them would be a cute couple.

Q – What higher purpose might Lee’s flashback to the trauma and the cat serve? Furthermore, is he hallucinating?

A – I think the purpose of the flashback is to show why Lee is so messed up. It shows that when he fell off of the fence and hit the ladder, it must have knocked something in his brain loose (dudes it’s a figure of speech). I believe that he has a head trauma that makes him crazy, and that was what the book was intending to do. So you see how insane he is and what he can do without even realizing it (i.e. the cat) 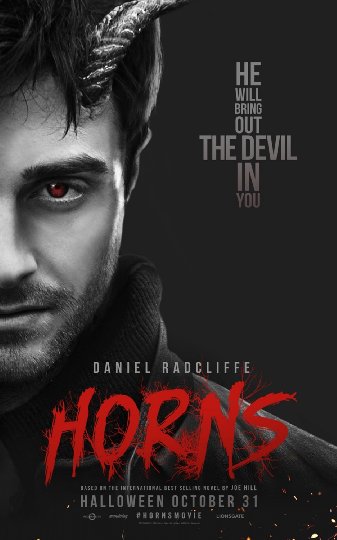 The Discussion Questions I wrote

Q – Ig receives the horns when he burns the tree house of the mind, but why? What purpose do the Devil’s horns serve Ig? If you could grow horns and know the deepest darkest secrets of everyone around you, would you?

A – Rules of the Tree house: “Take what you want / get what you need when you leave.” I think that the horns were what Ig needed to find justice for Merrin’s murder. Having them helped him greatly and he learned everything he needed to know to find peace for himself. Personally, I think it would be cool to have the horns. It’d be interesting to know what people thought of me. Sure, I’d end up having to be secluded and not wanting to talk to anyone… but at least I’d have the company of snakes and fire.

Q – In the beginning of the book, Lee fixes the cross – but Ig still gives it to Merrin. Do you think things would have turned out differently if Ig had let Lee keep it?

A – I don’t think so. Even in the book Merrin states, “I dropped it for you.” She meant for Ig to have the cross. I think somehow, even if Lee had given her the cross back she would have found her way to Ig.

Q – When Lee gets blinded in one eye from the explosion, Ig comes to visit him. While talking to Ig, Lee says to Ig that Merrin will discourage him from being with Lee thenceforth. In reply, Ig says that that isn’t the case and in fact, she’s so worried that she herself wanted to visit him. And then Lee says, “I know why this happened.” “It was a shitty accident. That’s all.” Lee shook his head. “It was to remind me.” “Remind you of what?” Ig asked. Lee was struggling against tears. He wiped at the blood on his cheek with the back of one hand and left a long dark streak. “Remind you of what?” IG asked again … but Lee never got around to telling him.   What did Lee think his accident happened for? To remind him of what?

A – I believe that Lee thought that the explosion was punishment for giving up Merrin to Ig for the cherry bomb. Lee had thought that God had given him a gift to take what he wanted and instead of taking it he gave it away. It’s interesting to me too that his eye goes blind, but he still can manage to see Ig with the horns. Maybe that was a “gift” from God?

Q – What did you think of the book?

A – I loved it. The writing is dark, beautiful and interesting. I saw the movie a long time ago and had no idea it was based on a book. Because of this I imagined Daniel Radcliffe as Ig, but things could be worse. It’s a great book for horror / fantasy fans and I highly recommend it. Joe Hill is a great author and has definitely made his own name for himself.

Taylor's ReaderRank
Taylor has reviewed 515 books with an average rating of 4.165 out of 5.
6 people have found Taylor's written reviews to be helpful on Goodreads.
See more...